It's been a while since I've written a convention report! Back in 2012 I wrote one for every con I attended, and then in 2013 things went so strangely that I kind of fell off the wagon. 2013 in general was a year of growth and change, and I was too busy living it, to attempt to properly document it, especially when I was caught up in things I wasn't sure I was ALLOWED to publicly record my opinions of. With this new blog, I wanted to attempt to get back on track with the reports, especially since my first convention of the year, KatsuCon in National Harbor, MD went so amazingly well! This was my third year attending KatsuCon, and I didn't really know what to expect; I had a phenomenal time in 2012, while 2013's was arguable the worst con I had experienced in years. It all got off to a very rough start, but that's part of what made it all so memorable in the end. It's bound to get kind of long, so click "Read More" to read the full report. I promise as least a couple of pictures to keep it interesting. I wish I had thought to take more photos during the weekend.

From there, we spent the greater part of 4 hours in one corner of the hotel, against a bad-ass looking stone wall. The lighting was fantastic, and the backdrop was neutral enough, but still had some character and texture. Kayla took the majority of our photos, with Rynn's boyfriend Joe taking a few specialized shots for us. Throughout the day we managed to see Michelle again (this time in her Petra costume, and she was so cute I wanted to scream) and Renee and India! I think that encounter with Renee was one of the most enthusiastic of the weekend for me, because she practically screamed when she saw I had managed to make it to the con after all the BS. <3 Nothing makes you feel loved like the excited and thoroughly-surprised scream of your friends.

Eventually, we braved the freezing wind to get a few pictures out by the most Titan-Esque statues in existence.

By then, we were right by Potbelly, so we stopped for food. All through the afternoon, I had been trying to keep touch with Alli about our Steins;Gate group for the evening. For a while it was on, then off, so I went to my room to re-charge. Lauren and Jo were just about done getting ready to go to Craftsmanship judging, when Alli texted me to let me know the group was back on. With just enough time to recharge a little, I threw Mayuri on for the second time that weekend, and headed out again. What followed, amused me way too much. First, I had to run back to the hotel room about 4 times, because I continually forgot things, only to go back, pick it up, and leave something else behind. I was supposed to meet Alli at the Gazebo, but because of the way the elevators were running, I had to ride the elevator up, to go down. By the time I got half way back down, Alli texted me: "change of plans, meeting on the pool level". That was fine, I was on the elevator down anyway. But then it stopped on the Gazebo level, and guess who got on? Yup, Alli. So, we rode down to the pool level together, where we met up with our Okabe, Daru, and Moeka only to immediately turn around and get right back on the same elevator, to ride ALLLL the way back up to the top floor, to grab Andrea. A few floors up, just as someone had mentioned wondering were Kerry was, the elevator door opened, and there she was, dressed as Suzuha. There were lots of "Hacking the Elevator" jokes going around. Sadly, by the time we got up to the top floor, it was clear Andrea wasn't feeling well enough to get into Ferris, so we just had to continue without her. Back we went, down to the pool level again to get photos against the white-wavy-wall by the elevators on that level. I have to say, even though I was only in a few group photos before we got booted out of that area, I had a lot of fun just hanging out with a new group of people, and getting to be part of an impromptu accidental Steins;Gate group, and I'm looking forward to seeing those shots. <3 I went back up to the 18th floor and hung out with them for a little while, half-focused on putting out messages to as many people as I could think of that I still needed to see that night. If I didn't make an effort to spend time with them that night, chances are I wouldn't be able to before I had to leave the next day. I made contact with Carleen first, so I headed downstairs to attempt to meet up with her. I met up with Rynn on the second floor, and after a short walk around the Gazebo level, we both went down to the bar to meet up with Carleen, August, and their friend Kelly. We snagged a circle of chairs just as another group was leaving, and stayed there for a while. Ended up running into Malinda and Kyle AGAIN, which made me super happy, so I chatted with them for a little bit before they had to run off to meet up with other people. Just about when Carleen and the others were getting ready to drift off, Renee came into the bar and Rynn and I shouted her over. Rynn left with Mandy and the rest of the OR crowed, and I stayed with Renee and some of her friends while I texted people to figure out where I was going next. I was supposed to meet up with Megan, and when I had texted her that I was in the bar with Carleen I expected she was going to come around, but then she never did. ;_; Turned out, it was Diana who got in touch with me next. I jumped on the elevator, rode up to the 6th floor, and spent about an hour hanging out with Mike, Nestor, Diana and her Fiancee Sam. Diana shoved water into my hand because I wasn't really up for alcohol, and we talked about tastes in anime, and I got to recommend and talk about some of my favorite under-appreciated series. Once I got the word that the Hawaii People were done practicing for WCS, I headed over to visit with Heidi and Kelly, and Diana sent me out the door with the remnants of a large bottle of water. 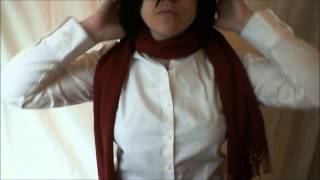